Looking at the current boom in the solar industry, you’d be accurate in thinking Here Comes the Sun is more than just a Beatles’ track.

Here’s an interesting fact from the Solar Energy Industries Association—in Q1 of 2022, the U.S. installed enough solar power capacity to power 23 million homes, with solar now accounting for 58% of all new electricity-generating capacity added in the U.S. Whether you’ve just got on board the solar train, or are a seasoned sun-worshipper, you are part of an industry that is only set to burn brighter and brighter.

While solar energy has long since been a part of the vocabulary of a number of people, it is still a foreign concept to a vast tract of the population. This throws up a complicated conundrum when it comes to solar marketing ideas. Is it a case of those who already know, already have, and those who don’t, don’t want?

If so, what does effective solar lead generation look like? How can you be part of the movement to ensure that more consumers are hit by the rays of solar growth? Most importantly, are there marketing strategies in place that are particularly relevant to the needs of the solar industry?

The quick answer is that a select number of digital marketing strategies have proven to be effective across the board, no matter which industries adopt them. White Hat SEO is still the most effective way to drive organic traffic and generate leads that matter—and it can be effectively employed in any sector.

But, like most things, the devil lies in the details. In this case, the details are how to employ solar marketing ideas that take into account the nuances of the industry.

Luckily for you, you don’t have to look too far. Here they are—9 ways to capture your piece of the sun through digital lead generation and solar advertising.

Having a look at the statistics of energy alternatives, it’s not hard to see that solar is on the rise in comparison to other players.

Added to this, incentive schemes are being employed throughout the globe that are only set to increase the uptake. This means that if environmental concerns are not a major factor in consumer decision-making, financial implications will be. The U.S. Department of Energy has set up Solar Powering America, which provides incentives to both individuals and businesses.

While the industry is undoubtedly on the rise, it is currently navigating some very real growing pains.

When it comes to solar advertising, the greatest challenge lies in an industry that, while growing rapidly, is somewhat betwixt and between. This means that you cannot simply adopt a blanket marketing strategy that is copy-pasted from other industries. You need to get specific.

You can only do this by understanding the unique characteristics of solar lead generation and marketing.

Which brings us to our next point.

2. Know that Solar Lead Generation Companies Must Cross the Chasm

Very broadly speaking, there have historically been two types of people who have solar installed in their homes:

Up until very recently, mass adoption was a pipe dream. The result is, we currently reside between two paradigms—the first of fringe adoption, and the second of mass adoption. A report by EnergySage has identified the current moment by referencing author Geoffrey Moore’s notion of “crossing the chasm”, an effective means of describing the tightrope between a climate of only early adopters and one of accepted standard practice.

While this “chasm” is exciting to cross, it’s a complex time for marketers, as it puts much of the onus on them to ensure that mass adoption indeed comes about. Marketers have to work that much harder to generate as many leads as possible and make sure that they are reaching the right people for long-term growth.

Unfortunately, as we will see in our next point, generating leads is sometimes easier said than done.

It may come as no surprise to you that according to Hubspot’s report on the state of inbound marketing, 68% of respondents agreed that generating traffic and leads was their company’s greatest marketing challenge. Added to this, 80% of marketers stated that their lead generation efforts were only slightly or somewhat effective. (BrightTALK, 2015) Wow. Look, we’re no Scientists, but in the words of a band that may need some sun themselves, “Nobody said it was easy. No one ever said it would be this hard.”

There is good news though—through hard, intelligent work and a focus on long-term solar marketing strategies, effective lead generation is possible. In fact, the reason our company centers around SEO is that we have found it to be the most effective means of generating leads that not only serve to bring in new clientele in the short term, but also ensure they keep coming in down the line.

As we have mentioned, the solar industry has typically survived off a referral system. Your neighbor installs solar, you chat, then so do you. The next step is to take this kind of referral system into the digital world.

This can operate in various ways. The first is to make sure you have strategies in place to capture good reviews of your work and display them clearly on your homepage. The second is the modern day equivalent of a referral system—link building. If you can get authoritative sources to link to your company’s work, you immediately up your credibility. It’s the digital equivalent of word of mouth, and it works like a dream in solar marketing.

It’s no secret that people do not want to be constantly advertised at. So much so that, according to Hubspot, 4 out of 5 people have left a webpage because of a pop-up or autoplaying ad.

So here’s the deal. Don’t inundate people with adverts. Rather, provide them with meaningful content that will serve to educate them about the benefits of solar installation. Make it concise and informative. This will be your greatest asset when it comes to generating traffic and getting people to engage with your business.

6. Use videos to garner trust and display your work

Videos work. It’s often as close as you can get to meet a contractor before they begin work on your property. What’s more, videos can serve as a moving brochure for your work. By displaying some of your previous projects, you will be able to illustrate that you are a trustworthy supplier that has completed jobs successfully.

Yes, keyword research is necessary for all sectors who would like to launch or maintain a successful digital marketing campaign. What makes solar marketing different is that it is important to make provisions for people who don’t necessarily know they are looking for solar until they find it. This is one of the key characteristics of a market about to boom—you have to show people what they want before they know they are looking for it.

We won’t dwell on this one. Just don’t do it. Numerous solar lead generation companies offer lists of leads at a pretty penny. These leads are very often outdated, irrelevant, and filled with the names of people who simply don’t want to be called by you. Don’t fall into the trap.

If you can get your company to the top of a Search Engine Results Page (SERP) through ethical means that take into the account the core mandates of the major search engines, you’ve struck marketing gold for the following reasons:

Before we leave you, congratulations!

We’re more than a little excited about the move to solar. As a company filled with big dreamers looking to change the world, an industry based on renewable energy is the kind we would like to engage with.

Our relationships with solar companies to date have been highly productive ones, as we have found that SEO can be of serious benefit to them, no matter what stage of development they are in.

Why not get in contact with us? We offer a free SEO strategy review that will give you insight into how well your lead generation efforts are working.

Here’s where to go. 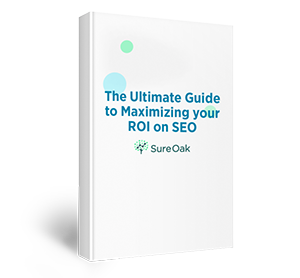 How should you invest in your SEO for the highest ROI?

Get my free ebook now 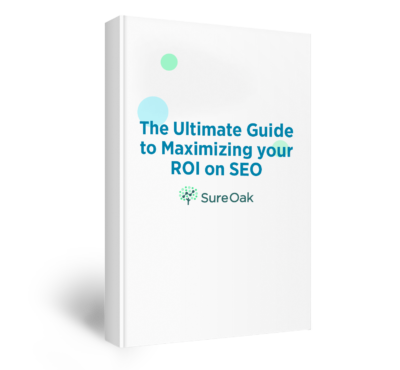 How should you invest in SEO for the highest ROI?

Read our eBook to find out now. Learn how long-term SEO marketing can yield BIG returns.
Get my free ebook

8 Questions to Ask Before Hiring an SEO Company

While you already know that SEO can transform the growth trajectory of your business, deciding whom to entrust with this crucial task is challenging. After all, there are enough fly-by-night agencies…

Why Sure Oak’s Link Building Strategy is So Effective

What’s a marketer to do when their link building efforts aren’t seeing the results they’re looking for? The answer may seem intuitive, but many businesses have trouble putting it into practice… 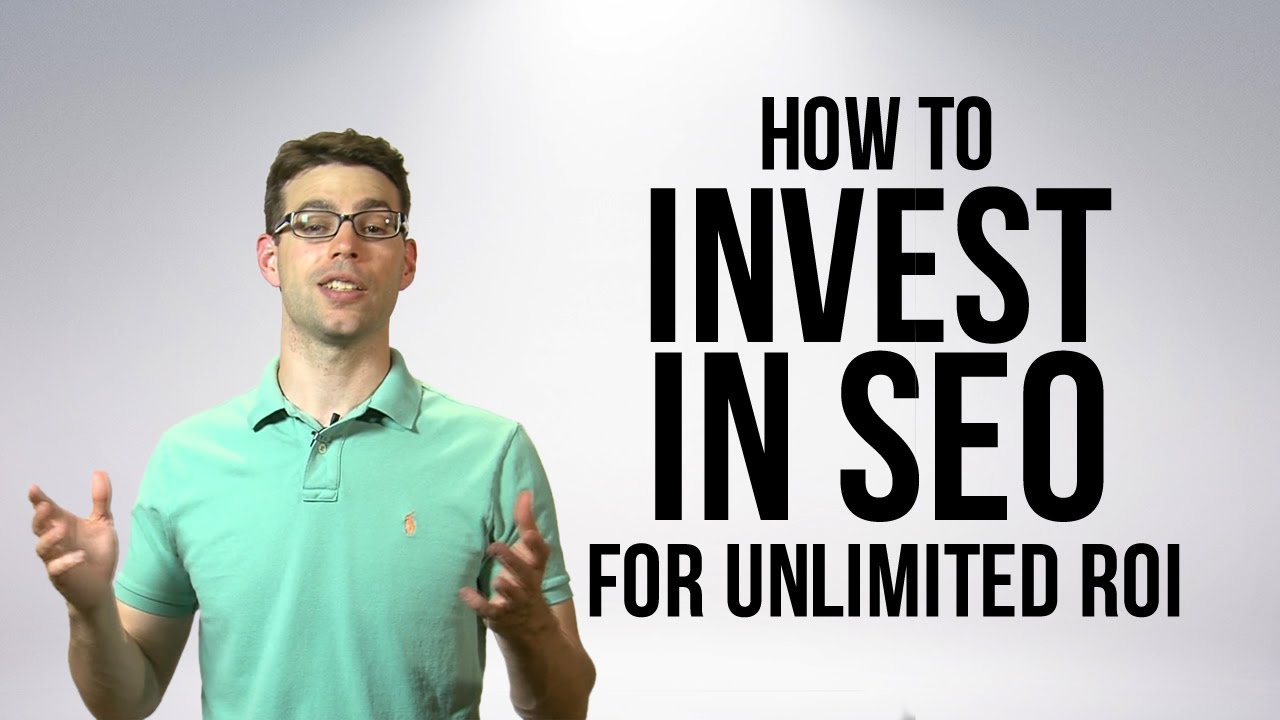 SEO ROI: How to Invest in SEO for Unlimited ROI

To get the highest ROI from your investment into SEO, you want to invest into your SEO by thinking long-term. When you focus too short-term, you miss the biggest…

We use cookies on our website to give you the most relevant experience by remembering your preferences and repeat visits. By clicking “Accept”, you consent to the use of ALL the cookies.
In case of sale of your personal information, you may opt out by using the link Do not sell my personal information.
Cookie settingsACCEPT
Manage consent

This website uses cookies to improve your experience while you navigate through the website. Out of these cookies, the cookies that are categorized as necessary are stored on your browser as they are essential for the working of basic functionalities of the website. We also use third-party cookies that help us analyze and understand how you use this website. These cookies will be stored in your browser only with your consent. You also have the option to opt-out of these cookies. But opting out of some of these cookies may have an effect on your browsing experience.
Necessary Always Enabled
Necessary cookies are absolutely essential for the website to function properly. These cookies ensure basic functionalities and security features of the website, anonymously.
Functional
Functional cookies help to perform certain functionalities like sharing the content of the website on social media platforms, collect feedbacks, and other third-party features.
Performance
Performance cookies are used to understand and analyze the key performance indexes of the website which helps in delivering a better user experience for the visitors.
Analytics
Analytical cookies are used to understand how visitors interact with the website. These cookies help provide information on metrics the number of visitors, bounce rate, traffic source, etc.
Advertisement
Advertisement cookies are used to provide visitors with relevant ads and marketing campaigns. These cookies track visitors across websites and collect information to provide customized ads.
Others
Other uncategorized cookies are those that are being analyzed and have not been classified into a category as yet.
Save & Accept